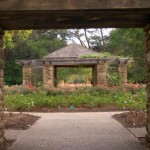 The beautiful Fort Worth Botanic Garden was once the site of three natural springs used by Native Americans and early settlers, a cotton gin, a gravel pit, and a dumping ground for the US Cavalry.

In 1912, approximately 37.5 acres was purchased to be Rock Springs Park.  In 1926 newly hired City Forester, Raymond C. Morrison, saw the opportunity to educate the public about plants and trees.  Work began in 1929 to create a natural setting of trails and utilize the springs to create ponds, lagoons and waterfalls.  In 1930, the landscape architecture firm, Hare and Hare, produced a comprehensive plan that included a formal rose garden and long vista through a grove of trees to connect Rock Springs Park to Trinity Park.

Construction began in 1933 in the midst of the Great Depression.  A government loan available to states for local work made through the Reconstruction Finance Firm enabled completion of the project.  The Fort Worth Municipal Rose Garden was dedicated on October 15, 1933.  The following year, Rock Springs Park officially became the Fort Worth Botanic Garden.

The Fort Worth Garden Club opened the Rock Springs Building in 1935 as the first established garden center in Texas with offices, a greenhouse and a library.  Today, the expanded building houses offices and restaurant.  The attached Exhibition Greenhouse holds a portion of one of the world’s largest species begonia collection.

In 2009, the National Register of Historic Places recognized the original Rock Springs Park.

To the southwest of the Botanic Garden, on private property, stood an abandoned gravel pit, used for decades as a dump by a calvary unit.  As a result of the vision of Scott Fikes and Charles Campbell, in 1968 Kingsley Wu was hired to design the 7.5 acres Japanese Garden.  From 1970 to 1973, park employees constructed the Mediation Garden, the Teahouse Complex, the Tea House, Moon Deck, Pagoda and ponds.

The Garden Center in the Rock Springs grew too small to accommodate the business of a growing garden.  In 1984, ground was broken on a new center, designed by Hahnfeld Associates.  The new Garden Center with 17,000 square feet of business offices, meeting rooms, a conservatory, and a 240 seat lecture hall.  The 10,000 square foot  glass enclosed Conservatory  holds plants from all the world’s tropical regions.

Each weekend from June 1through July 4th, the vista transforms into lawn seating for Concerts in the Garden in conjunction with the Fort Worth Symphony.  Linking the areas is the Texas Native Forest boardwalk with viewing platforms and educational features designed to engage children.

A large Flower Clock and the Water Conservation Garden filled with native, water-thrifty, well adapted and wildlife friendly plants greet  visitors to the oldest botanic garden in Texas…..Morrison’s  fulfilled dream of an “outdoor library of plants”.